Although it is usual for the CSIG to announce 2 releases each year, this spring we decided not to release a spring version. The reasons for this are a little bit complex, but primarily around the size of the single download. Many testers are finding that the current download at 1.8 GB can take upwards of an hour to download even on a good Wi-Fi connection, and this was unacceptable. We are looking at ways to improve this, one of which is to split the system into areas, but this approach leads to some technical difficulties which we are chasing down. We also felt that the new update did not include too many changes and that the tester group could comfortably live with the existing release. The plan is also to incorporate more data for the Grand and Royal Canals in the next release and this involves some new mapping techniques which we are working through.

So, in summary, please accept the CSIG apologies for not having a spring release, but look forward to an improved release shortly.

Many of you know Donal Boland and his barge the James and Mary. So recently on a Heritage Boat Association event I caught up with Donal and asked him for a little bit of his history.

Donal started his working life as an electrical engineer, moving onto Production engineering until his interest started to develop in Marine Archaeology. He started as an amateur but the interest developed to such an extent that he soon became a professional underwater archaeologist and recently gained his PhD for excellent work in the area. Donal has many discoveries to his name, not least the ancient bridge at Clonmacnoise.

Donal first became involved with the Shannon over 20 years ago when he purchased a Humber Keel Barge from Victor Waddington in the UK who specialised in these Humber barges. He brought it to Shannon Harbour and within 12 months had the conversion complete and the James and Mary was born. Donal soon moved onto her as his home and has lived there ever since.

Soon after that Donal joined the IWAI and partook in many rallies and events but somewhere in his head a concept was forming where the traditional IWAI territorial structure had some failings. In particular, Donal had noticed that there was not much activity in the cross branch sense and that projects could fail because a particular skill was not available in a branch, but could have been available in another branch. This is where the concept of a Special Interest Group was hatched. The idea would be the Special Interest Group (SIG) would have no fixed structure, no committee, no hierarchy, but provide different expertise from different branches and all focused on the one common interest. The first such SIG was formed when a group from many branches had an interest in charting the inland waterways and the Charts Special Interest Group was formed. Members of the CSIG were introduced to the science and art of mapping and charting with education sessions and meetings, and it grew from there. The specialist skills soon came to be used including, mapping, surveying, IT, web, and so on, and having the cross branch structure and using the funding provided by the IWAI via a special project of the Derg branch the CSIG was off the ground. As a result 6 years on, and for the first time since the 1800’s when the British Military surveyed the major lakes, we now had a project dedicated to updating that status. Other groups, such as CFRAMs did isolated sections with different objectives, but the CSIG focused on navigation safely to places previously marked as no go areas. There are still lots of places not surveyed and the CSIG will be going for some time to come.

Donal’s latest Tranquillity Special Interest Group (TSIG) has kicked off after a number of years interviewing visitor and locals as to why they would keep coming back to the Shannon, and in particular after the publication of his book on the mid Shannon, namely Designated and Tranquil Moorings on the Mid Shannon which can be purchased from the IWAI shop. He discovered the repeat visits were primarily to experience the peace and tranquillity which were not available anywhere else. Donal recognised that he needed to formalise this entity. He started by contacting Dr. Paula Treacy in the Environmental Section in Waterways Ireland to see how they might achieve this recognition of the Tranquillity entity. Waterways Ireland came on board and visited a number of places that would be suitable as Tranquillity spaces and have now established the procedures to progress this.

The TSIG project was launched to the boating community at the Jamestown Festival where a steering group was established with different representatives from differing sections of the waterways, namely, Lough Derg, Lough Ree, Mid Shannon and the North Shannon. Pat Nolan agreed to become the PRO of the group, paralleling the same function that I perform for the CSIG. Brian Coniffe has agreed to become the mapping master similar to what Brian Willson does for the CSIG. The TSIG will use the base maps of the CSIG, but without depths, to display and map tranquil sites at, on, and along our waterways and canals. This will involve working with groups outside the IWAI, which is new to this group. Other state bodies have now recognised the importance of tranquillity in for example the ‘Irelands Hidden Heartlands’ but they are failing to recognise that it is the river that is the draw and not just the surrounds.

So, in summary, we owe Donal a big thanks for being the instigator of the concept of a SIG, the formation and success story of the CSIG and the now formulated TSIG. Many thanks Donal.

If you would like a presentation to your branch on the CSIG charts please contact me, Les Saunders at barge41m@yahoo.co.uk and we can arrange a suitable time. 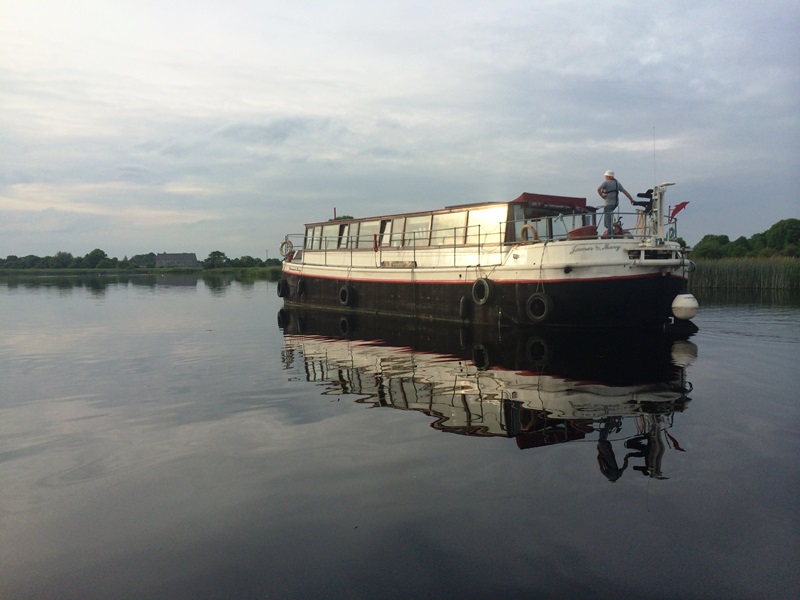