Surveying can be what you make it: it can be driving around in ever decreasing circles or a fun day out in your boat.  I tend to make it the latter.

I’ve been boating all my life: as a young boy on the coastal waters around Dun Laoghaire, Dalkey, Killiney, Bray and Greystones and on Irish inland waters since the 1970s.  I now virtually live on Lough Ree from March to November, and even in the coldest winter months will spend several hours a day on my boat ‘Reelax’. Even then, weather permitting, I’m often able to slip onto the lake for a few hours surveying. 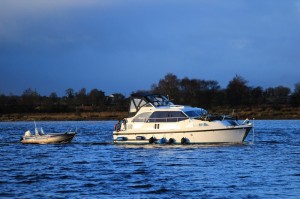 Pat and Reelaxing on Ree – by G Byford

A day surveying, whether it be on my cruiser or on my small survey boat, begins with connecting all the electronic equipment I use. Today this consists of a laptop computer with the software DrDepth installed.  This program enables me to gather and process the data from my GPS and depth sounder.  The depth sounder with transducer measures depth, the GPS unit ascertains position, and an IPad with charts displayed gives positional information.  I also have a backup depth sounder just in case, and a battery pack to power the lot.

My first stop is Athlone Lock to take a reading of the depth of the river. This is used to correct my depth readings from today’s survey back to ordinary summer level in order to maintain continuity of depths for the charts produced from the data I’m about to collect.

Then off to Lough Ree.

I plan each day’s survey to cover areas I haven’t previously surveyed.  To begin with I consult DrDepth on the laptop, which contains a database of the areas I have surveyed. I then draw an imaginary line between two points, or follow a line on a survey grid super imposed on DrDepth, and begin to motor along that line.  On reaching the end of the line I turn and motor along a line parallel to my first one.  I continue in this manner until I have surveyed the planned area. 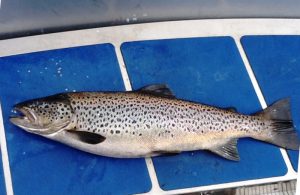 Lunch on board – by P McManus

Boring you might think?  Not at all! My knowledge of Ree comes from the years I’ve spent fishing it and, fortunately, fishing and surveying are easily done together: all the time I’m collecting data, which can be up to eight hours a day in the summer and four in the winter, I’m trolling baits behind ‘Reelax’ that I know are likely to deliver a fresh caught brown trout for my lunch or supper. Often I’ll spend the night at one of the many sheltered anchorages I know and love. Here I’ll barbecue the day’s catch, sit back with a glass of red wine to enjoy the space and calm, and plan the next day’s surveying and fishing.

Surveying does not end when I leave the boat.  Now I need to review all of the data collected, which can take as many hours as collecting it. Looking back at the data, especially sidescan, can be exciting as I might have discovered a wreck or a never before seen rock.  This excitement then encourages me to plan my next surveying adventure…

Pat’s thoughts as he surveys Ree are here http://www.reelaxfishing.blogspot.ie/

Initially surveying members of the CSIG used only their own instruments: some adapted the relatively basic depth sounder already fitted to their boat by adding a data storage unit, while others had access to much more complex professional surveying tools. Individual members have also invested considerable sums of their own money in upgrading from quite humble technology to side-scanners which, rather than sending a single ‘ping’ for each sounding, take a continuous and detailed video of a wide area of the lough or river bed. 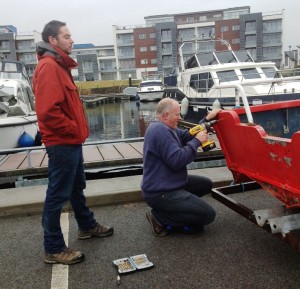 Installation on dory – by P McManus

In addition to the above, IWAI branches have bought Garmin 451 chart plotters and depth transducers for use by the group. These have kitted out four more survey teams, with each team using two boats: a large vessel for deep water work, and a tender to survey shallows and margins. By fitting a transducer to each vessel, and moving the chart plotter between the two, we have kept down costs while ensuring the quality of the data remains as high as possible.

Of course the usual rules of ‘we’ve never enough’ apply: we’d love to have access to more kit, be it offered for the group to use or on a prospective member’s boat, and it’s hoped that the future will see further advances in the technology available to us and the number of surveyors working on the project.