The CSIG charts have evolved over the past four years 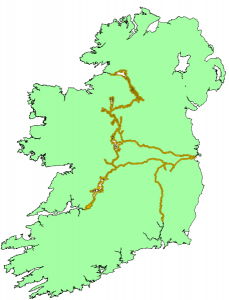 from just two areas (Lough Derg and Lough Ree) to encompass the whole of the Shannon and Erne, the connected Canals and the Barrow, as shown by the brown outline in the image to the right.

Firstly, there is the graphical representation of the waterways and all useful and interesting objects in and around it. This could be referred to as the background image.

Secondly, there is the bathymetric data (spot depths and depth contours) that provide the navigators with the information required to make their passage safely.

The first part of creating the background image is largely complete but there will always be corrections and new things to add going forward.

The second part of populating the bathymetric data has come on in leaps and bounds since the project started but still has a long way to go.

The process starts by creating shapefiles of the shoreline and any other objects that you want to appear on the charts. Things like islands, pontoons and harbour walls for example.  This is done in Global Mapper, by tracing around the objects from aerial imagery; it is a very time consuming part of the process.  Although there are publically available shapefiles through sources such as OpenStreetmap.org, for our purposes they can be quite inaccurate and if to be used would generally require a great deal of editing, so it is not usually worth going down that route.

There are three types of shapefile

You control the look of the 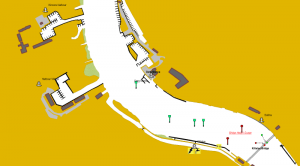 shapefiles by grouping them into “types” then assigning attributes to make each of them look like the object you are trying to portray. In the case of areas, it may range from a simple solid colour to having a contrasting border or having a custom bitmap infill. In the case of Points, it could be a simple dot, but many have been created that are customised for our usage – the navigation markers being a good example.

This map building phase was a massive task that was completed in stages over the first three years.  It now just requires tweaks where errors or changes are noted.

The bathymetric data collected by our 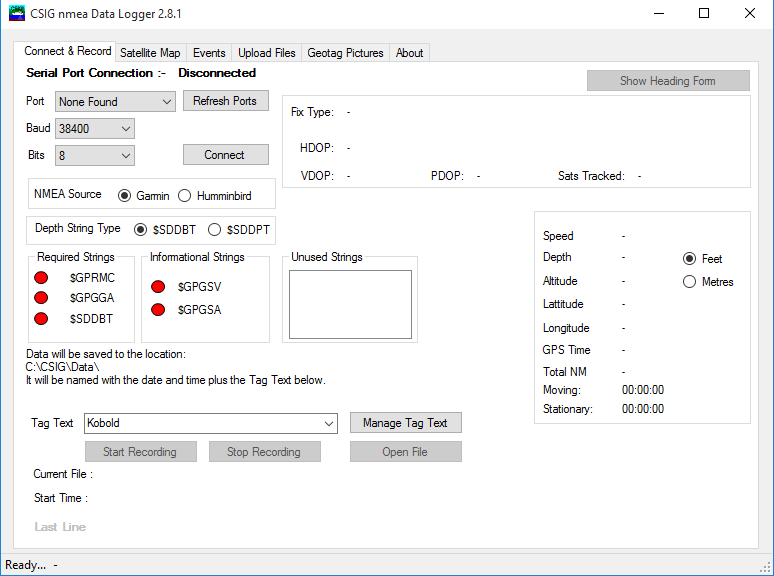 surveyors is processed through a database, and then exported into a format that can be read by our mapping application.  This produces the spot depths and depth contours you see in the charts.

The database processing takes the raw NMEA data collected from the GPS/Depth Sounder on the survey vessel and corrects it according to the depth offset of the vessel and the water level on the day in that area.

Checks are made to filter out unusable data such as duplicate depths and data where the GPS signal was weak or un-reliable. Notes are made against a variety of other quality measures so that further data can be eliminated if it is deemed inaccurate.

One of our biggest headaches is weed giving false shallow readings.  Using a safety first approach, these will not be filtered out until a surveyor confirms the minimum depth at which time I can apply a filter to any given area that only lets depths over a known value show through.

Once the data is loaded and corrected, I can begin the process of exporting the files to be used by Global Mapper.

First File:  The first file contains the data that will build the depth contours and consists of all valid depths below 9ft. Global Mapper builds a terrain grid from this data which in turn is used to build the coloured contours seen in the map.

We have developed a five colour range for 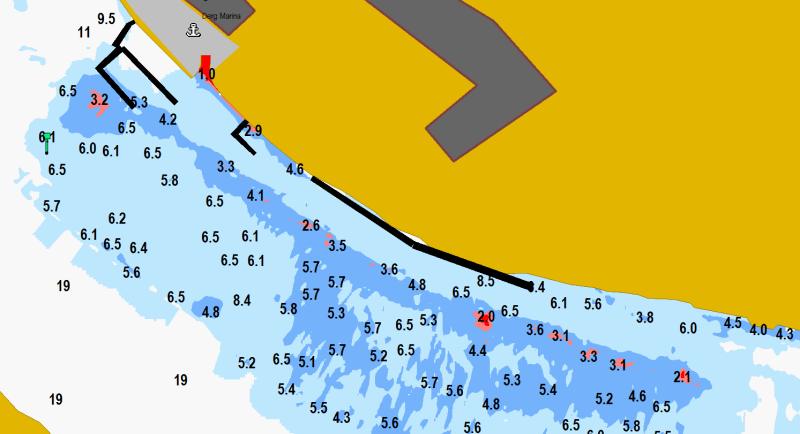 the CSIG charts, which gives a very quick visual guide to the area you are navigating in and is most suited to the areas and types of vessels using the charts.

In addition to these contours, we show a yellow hashed area outside of the marked navigation in some of the open broad loughs, to indicate that we haven’t surveyed and to avoid confusion with the white (>9ft) areas.

There is a certain amount of interpolation (guessing to be more specific) that joins the depths together to create these contours but I restrict the distance to be on the safe side.  This is why you will see some contour areas with coloured stripes rather than solid colours. As the surveyors go back over the area between the original survey lines, they begin to fill in the gaps.

Second File:  The second file contains the spot depths that will be included in the chart. Currently this is split into two sub-processes that distinguish between values less than or greater than 9 ft., which is the point at which the Depth Contours start.

To select the most appropriate spot depths from the millions we already have I (or rather my hard worked computer!) grid the entire survey area into 64 million squares and select all spot depths that match the minimum depth for each square.  For areas above 9ft, the spot depth density is one quarter than that below 9ft to help de-clutter the deep water areas.

Up until now, all of the data is in vector format in Global Mapper. This is a very compact and easy to work format, but not very well supported in end user applications, so I now need to export this data in to a format that can more easily be used on mobile devices and laptops. This requires that the data be exported in raster format (or picture tiles).

These image tiles are packed in different ways depending on the destination application.  It is the most intensive phase of the process; it will take up to a week to complete, using two very powerful PCs running 24/7. 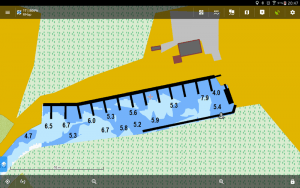 So where do we go from here…

At the time of writing, we have over 4.7 million viable depth soundings from Limerick to Lough Allen on the Shannon, along the Shannon Erne  (SEW) and from Belleek to Belturbet on the Erne.  We have produced maps for the Shannon, SEW, Erne, the Barrow and the Royal and Grand Canals.

We have a small band of Surveyors who go out collecting the data, either in a planned mission to survey a particular spot, or more often than not, just recording as they go about their travels. There are in excess of 150 Beta Testers using the charts who provide feedback if any errors or omissions are noted. The surveyors send in their new files and the testers send in corrections.  We then start the process from Step 2 and when complete, release new versions of the charts to our members.

We are gradually increasing the number of surveyors we have, and obviously the more we have, the faster the data will be collected.  To that end, if you are able to join our ranks (especially in the areas where data is sparse) then please get in contact!   charts-info@iwai.ie