There is a wealth of natural and social heritage and history in old castles, small villages, industrial buildings and artefacts, locks, bridges and small harbours on our waterways, all with their own distinct charm. These can be accessed by boat but can also be approached from many of the excellent paths and cycleways that have been built around Irish waterways.

The intention of the CSIG is to provide information for these areas of interest; to include GPS positioning, links to photographs, historical and industrial heritage material and as much information as our volunteers can gather.

In the meantime, here is an example of some of the places you may expect to see on the charts.

Large stretches of the inland waterways of Ireland have excellent paths that allow walkers and cyclists to savour the delights of our natural and built heritage. These paths on the Grand Canal, Royal Canal, and Shannon Erne Waterway, River Barrow, Newry Canal and many stretches around the large and smaller lakes. With the Greenway initiative from the EU through the Department of Transport, Tourism and Sport (DTTAS) and local councils, these paths are improving and will allow many more walkers and cyclists to enjoy the waterway corridors.

The Main Line of the Grand Canal starts at Inchicore in south Dublin and passes through counties Kildare and Offaly, including towns such as Sallins, Robertstown, Tullamore and Pollough, before terminating in Shannon Harbour, where it meets the River Shannon. The rural sections of the Grand Canal Greenway are expected to be complete by Summer 2022, providing a way for cyclists and walkers to Shannon Harbour.  Dublin cycleway from Inchicore to Lucan Bridge has lights and security along it.

The Circular Line runs from Inchicore back into Central Dublin terminating in the hub of Grand Canal Docks/Ringsend Basin;  an excellent walk, and indeed the stretch also has some cycle paths. It is a welcome piece of heritage running right through the middle of the city with a very interesting history. The IWAI Dublin Branch regularly organises talks and walks along this stretch. The newly renovated docklands are wonderful to see and heritage sites such as the Graving Docks where many of the old trading boats where built can be viewed. For more interest in the old boats, go the Heritage Boating Association

Just past Sallins is the canal leading to Naas and beyond to Corbally.  From Lock 1 to Naas is a very popular stretch of road and path, some of which is used just for walking.  Onwards from Naas is a walk and cycleway that goes as far as the culvert under the old Limerick Road.  When this obstruction is eliminated and access is possible all the way to Corbally Harbour, this will be an outstanding linear park for walking, cycling and water activities for locals and visitors.  the people of Naas.  IWAI Kildare

Meandering from the historic boating yard at Lowtown to the town of Athy, the Grand stretches south.  Through old boating stops that thrived when this was the main transport artery from Waterford to Dublin, this is the Barrow Blueway from Robertstown to Athy.   The canal passes through the towns of Rathangan, Monasterevan and Vicarstown before joining the River Barrow at Athy.

Near Lowtown is the Miltown Feeder, the main source of water for the Grand Canal from the Pollardstown Fens.  The Pollardstown Fens are reputed to be the largest calcereous spring fed fens in Ireland with an eco-system that stretches back 13,000 years.  These fens are best known internationally for their extensive areas of fen vegetation and the fact that they support a number of rare and threatened plant species.  There are walkways, including a boardwalk, where the fens can be observed.

The last stretch of the Royal Canal was officially reopened in 2010, making it now navigable all the way from Dublin to Clondra near Tarmonbarry on the Shannon for the first time since the late 1950s.  The canal passes through north Dublin, Maynooth, Moyvalley, Mullingar, Abbeyshrule and other small villages.  The Royal Greenway which opened in 2021, has proven to be hugely successful with walkers and cyclists.  The main Dublin-Sligo railway passes alongside the canal for many kilometres.  The heritage aspect, waiting for many to discover, is amazing, bringing one back to the trading days.

There is active campaigning for the restoration of the navigation on the Royal’s missing link, the Longford Branch, with some positive results in 2012. There is a path from its junction with the Royal into Longford town. 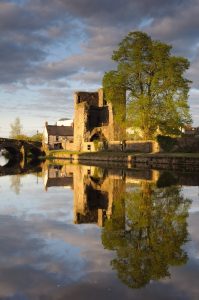 The ‘Goodly Barrow’ meets the River Suir at Cheekpoint and is noted for its natural beauty, history, many myths, industrial and built heritage, wildlife and the many amenities available for outdoor enthusiasts.  Work started to create the present navigation in 1761 and its canalised sections, beside its myriad weirs, provide contrasts to the beauty of its Rhine-like landscape.   The Barrow Way stretches from Athy south to Saint Mullens through Carlow, Leighlinbridge, Bagenalstown, Goresbridge, Graiguenamanagh and many small villages along the river.

The Shannon Erne Waterway (SEW), a new waterway built along an old canal, connects the River Shannon at Battlebridge to Upper Lough Erne. The SEW starts in Leitrim, passes through Kescarrigan, Ballinamore and Ballyconnel and onto Belturbet.  The border runs along the middle of the Waterway for long stretches, so depending on which side you are on will determine which currency you might need. Whilst it is not possible to walk along the SEW for its entire length, towpaths are provided between a number of the locks and other mooring points.

The Newry Canal is the oldest summit-level canal in Britain and Ireland. When it opened, in 1742, it showed design and engineering skills that had never before been seen in either country.  The Newry and Portadown Branch of the IWAI are restoring locks on this disused waterway and recording the history and heritage of the canal and its environs.  The CSIG are currently working with them to chart this stretch of water.   In 2005, the four local councils completed the upgrading of the towpath creating the Newry Canal Way, a long distance path for walkers and cyclists from Carnbane to Portadown.   www.walkni.com/ulsterway/sections/newry-canal-way/directions/